From hard work to holidays

Teacher training ended just days before Christmas. There was a strange crop of Santa suits for sale hanging all over the old quarter. Instead of being red and white they were red, white and yellow. I assumed this is because the Vietnamese flag colors are red and yellow, so being a popular color theme in the country. 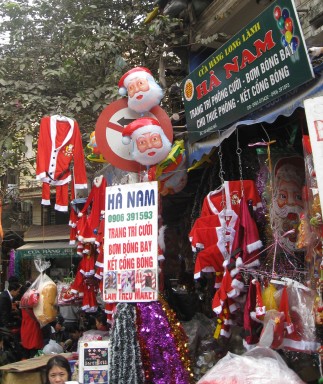 Santa suits for sale in Hanoi

While most Vietnamese practice a variety of folk religions, about 16% are Buddhist and 8% are Christian (mostly Catholic, mostly in the south). When I asked my Vietnamese friends at my hotel what happened on Christmas. They replied, not very much, that sometimes they dress up and drive around to see the churches and the beautiful decorations. Business is not closed, but Christian people celebrate it more.

Come Christmas eve, I had a nice sit-down dinner with the staff and other guests at my hotel. It was a mix of Vietnamese cuisine as well as french fries and not very good wine.  I helped in the kitchen with the springs rolls, letting the staff have a laugh at my inexperience.

Travel tip: always say yes to any task or event when invited.  Be humble and allow your local acquaintances to have a laugh at your expense. Laughter and teasing are great friendship builders.

The busy street I lived on was even busier than usual, thick with people on their motorbikes. Every so often someone would be in one of the Santa suits that had been for sale the week before, mostly men, one woman and several adorable babies.  I had blast stopping people for a photo; the mood was celebratory and sweet.

There are a few beautiful old cathedrals in Hanoi, one of the more famous ones was just a few blocks away, so I thought why not join the noisy throngs and see what was happening there. When I arrived the crowd around the majestic cathedral was thick with hundreds of local people waiting to get in. I was just there to see what I could see and unconcerned with actually getting into the church (I’m not Catholic).  However, the crowd kept opening up in front of me and I was being gently ushered to the door. Because I was a westerner, they assumed I was meant to be there, and were eager to assist.

Once in, it was near the end of Mass. The attendees appeared to be about half Vietnamese and half foreigners. The Priest spoke in English, with a very strong accent. The choir sang some hymns in English and some in Vietnamese. The final “Hymn” was Jingle Bells. Every one was all smiles and warm greetings as the service ended. It was a truly joyful worship.

Then the doors were opened to the public that was patiently waiting outside. The non-Catholic locals filed in with total reverence and respect that such a church deserves. I myself was in awe.

I thought, how amazing if people of different religions could all be so warmly and innocently curious of others spiritual practices. What if Muslims, Jews and Christians all welcomed and all visited each other’s places of worship on their holy days just because it is beautiful?